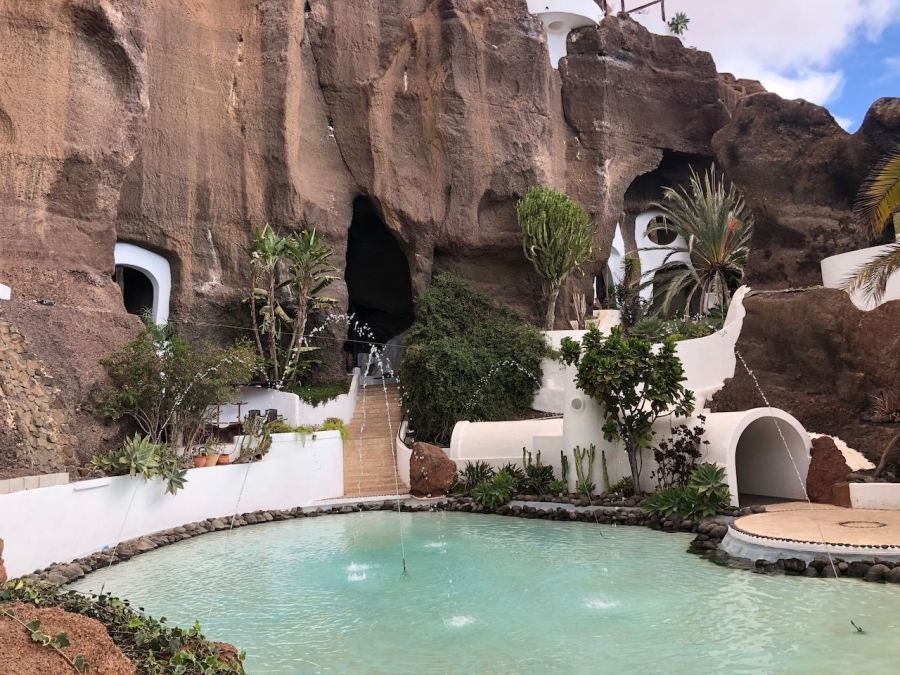 Leaving La Graciosa was not only due to the bad weather system forecasted to come in. The main reason was to meet our friends from La Rochelle, Paulyne and Rob, which we haven’t seen since mid February 2020. After such a long time we were desperate to catch up. Only one hour after arriving in the marina of Puerto Calero we were sitting in a nice bar eating fish & chips (British guys 😉) and drinking a lot of IPA with the crew of Saviour. We had a blast that evening catching up, eating and drinking. Unfortunately the next day turned out to be not quite as nice as the previous day. A light suffering due to hangover was felt by the crew of Altimate. It came in handy that we only had to clean the boat that day, as we felt not quite capable of doing more brain using tasks. Very beneficial for Altimate, she got a good cleaning while our hangover slowly disappeared.

The next couple of days were much more efficient. Together with Paulyne and Rob we rented a car and had another go around the island. Our first destination was Arrecife as we all needed to get some new gas bottles and some other articles which were easy to get there. Jobs done, we decided to head southwest direction Yaiza and after a nice lunch break somewhere in the middle of nowhere we drove further to El Golfo. It was again amazing to see this side of the island with the waves breaking ashore providing a spectacular picture. Meanwhile it was already late afternoon and our original goal was to buy groceries so we headed to a big supermarket, spent a lot of money and got back to the boats.

The next day was just a pleasure day, no need to run any errands. We met late in the morning and headed straight to Nazaret a little town in the middle of the island. My wish was to visit the so called “Omar Sharif” house located close to Nazaret. This house was again designed by the famous architect César Manrique. It is an amazing property built in and around rocks of a volcanic quarry with natural labyrinths and caves. Like all the buildings designed by Manrique, we had already admired the houses he lived in at our first visit to Lanzarote, this one was just as amazing and spectacular as the other ones. We strolled around the house and pretended to be living there and being awfully rich😁. Isaac the son of our friends joined us that day and he treated us for a cake and coffee in the restaurant of the museum. Nice!

The Saviour crew had not been to the northern tip of the island yet which made the decision easy where to go next or rather which direction to pick. Going up north we passed the “Cuevas de los Verdes” (green caves) where we only had a quick stop as none of us was in the mood to actually visit the caves. Our next destination was the little fishing village Orzola. This harbour village provides the only ferry connection between Lanzarote and La Graciosa. After a little stroll to the harbour and a nice snack at a bar we headed to “Mirador del Rio”. A great stop with a stunning view down to La Graciosa. We wanted to show Rob and Paulyne the nice anchorage where we had anchored to persuade them to go there as well. Ok, we didn’t really need to persuade them as they had planned to go there anyway, but seeing the island from up there changed our decision for the next coming days. Our plan was to go south of Lanzarote and maybe stay again at Papagayo and Los Lobos. Seeing the anchorage of La Graciosa we thought: why not sail back there and enjoy the easy anchorage life? All the other anchorages we discovered in the Canary islands were not really suitable to stay for longer. Too much waves or swell or wind…

We all enjoyed the pretty view and agreed that La Graciosa is definitely worth visiting. By now it was time to slowly head back. We had another stop in Haría before we finally drove back to Puerto Calero. As our way back was almost directly heading west we were treated with an unbelievable long and amazing sunset which seemed to get more stunning every minute. I guess we took millions of pics, probably more😁.

Early Monday morning we said goodbye to our friends (ok, we did it already the day before) and sailed back to La Graciosa. It was a long day as we needed to close-haul against the prevailing winds all the way up, but we had beautiful sailing conditions. Almost no waves, sun and not too much wind. No fish though! The tacking made out of 45 miles from La Graciosa to Puerto Calero 65 miles for the return. After the intense sail we were looking forward to some lazy days on Altimate. A great thought, but our toilet pump had other plans for us. This annoying part decided to give up 🙄 – again. Ok to be fair this pump kept working a whole year and was not even leaking. Since we bought Altimate we always had issues with a leaking pump. We had bought a complete new toilet and had already changed two times the pump because it was – even new – leaking. The good thing is only the flushing water is leaking (yeah!) but still it is annoying! El Capitano changed the pump, (presuming they don’t last long we have bought two spare pumps), but it did not work quite right. Of course it was leaking but somehow the sucking of the pump did not seem to work properly. OMG! Ok another try, dismantling the old new pump and mounting the new one. Same result only that the screws were meanwhile not holding anymore. What a fun day! Long story short after the whole day trying to fix it, we decided to live with a temporary solution until we get to Las Palmas. There we will treat us with a complete new toilet of a different model which hopefully will just work without any trouble.

Yippee, finally the next day was just a fun day. We hoped. Roughly until 2pm. Then within an hour and without warning the wind changed from north east to south and rose up to 30 to 35 knots. Catabatic winds falling down the cliffs of Lanzarote brought us some uncomfortable waves on the bow and a lee shore situation. All the boats were shaking like hell and pretty fast the anchorage was almost empty. We too decided to leave before it got dark. At the opposite site of the bay close to the cliffs of Lanzarote was another anchorage which seemed suitable and safer in these southerly winds. The wind was a little stronger there but the waves could not built up so close to shore. It was a rough and noisy night but we felt quite safe. In the afternoon the next day the swell started to come from the west and made the anchorage very uncomfortable so we just headed back to Playa Francesa bay. The wind was still blowing a lot but the direction had changed and the waves were gone. The next days were exactly what we were wishing for. No wind, no waves, just sun and fun😁!