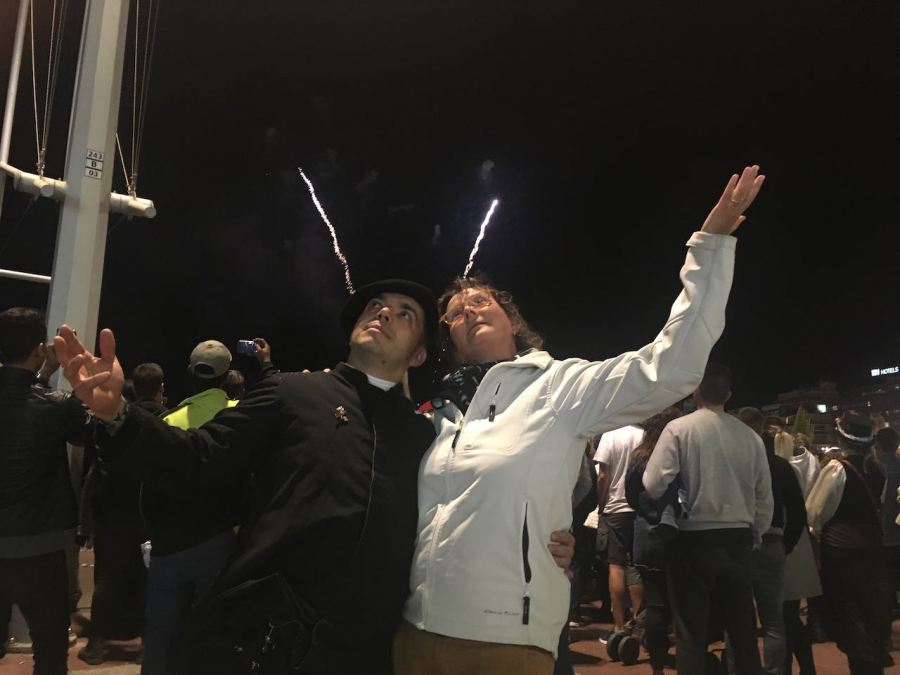 I was very curious of how carnival would be here in the Canaries. The peak of the jollifications in Las Palmas were at the last weekend of February. The drag queen finals, the carnival parade and the funeral of the sardine. It was not necessary to make a decision where to go as each event was on a different day.😁
Ok, the parties wouldn’t start before the next weekend! Plenty of time to do other things.

We checked our guide book and decided to visit the little almond town named “Tejeda”, in the central highland of Gran Canaria. A pretty mountain village with delicious (almond) desserts/pastries, a beautiful church and steep and winding streets. We were also hoping to see the almond blossom, but we were – I guess- a week or so too late. A pity, I would have loved to see all the trees in bloom. Though a few blossoms were left which we caught in the pic below.

The village was really cute and surrounded by the Roque Bentayga and the Roque Nublo, huge rock formations. That made the drive, reaching and leaving Tejeda a very spectacular one. The area had plenty of deep and large ravines with lots of zigzagging roads. Definitely a fun trip with the car, but it was sometimes at the edge of feeling comfortable at least for my gut. I could feel a little complaining…
All good! A walk around the little village with a lot of fresh air and beautiful flowers let my gut immediately forget all about the curves.😉

Of course we did not miss the famous pastry offers. We supported one of the delicious confectionaries and treated us with almond pastry and cafe con leche. The little hike back to the car was so much easier, full of healthy almond pastry energy.😋

Another day when we were on our way to do some errands we had a RV in front of us. (Here I’m talking about an European size camper van not Texan size.😉) That is usually nothing special to mention but it was a German van and not only that it came from our home town Essen. Unfortunately we could not say hello the guys inside but at least we had fun and took a photo.

Finally Friday came and we (mostly me) were keen on watching the drag queen event at Parque Santa Catalina in the northern part of the city. Ready to party I put my Capitano in a cute dress, applied some make up and concealer on his sweet cheeks and off we were. Anybody who believed it?🤣
Ok, we just walked up undisguised to the park and checked out what was going on. As we were a bit early we found a bar where we had some tapas and a beer. We watched some perfectly well dressed guys. One really seemed to like mi Capitano and of course I was ready to take a pic.

The drag queen show was in a closed area where we would have needed tickets. As we were (and are) not capable of understanding that much Spanish, there was no point in trying to get some tickets for the show. Yet it was possible to watch the pretty queens on a screen at the Santa Catalina park.
Somehow it was not what I expected (even though I don’t know what I was expecting). The drag queens had to survive on unbelievable high heels while at the same time dancing, singing and presenting a crazy performance. In between they all needed to redress a couple of times and at the end of their presentation they had to answer some questions. We had no idea what kind of 🤷‍♀️. Understanding the show would have helped a lot and would have made it probably funnier for us. Still we enjoyed the show and especially the huge amount of men dressed up as women.

Saturday was the day of the parade. We wanted to meet some sailor friends but unfortunately that didn’t work out so we watched the parade on our own. Well not alone, of course with a lot of other people, but none of them we knew. Another sailor who lived here for quite a while gave us a good hint where to go to watch the parade. That was nice and we managed to see the whole parade even though we were a bit late. Being announced that the carnival in Gran Canary was one of the biggest and prettiest and most spectacular in Europe we were very excited to join it.
Let’s put it this way. It was nice and interesting and we don’t wanted to have missed it BUT. Coming from an area in Germany where Carnival is a very big deal -I grew up celebrating carnival either in Düsseldorf or Cologne- it was a little bit disappointing. I was expecting something like in Rio, party, dancing and more dancing, Brazilian music, warm weather, happy people, forcing more partying and and and. At least somehow more atmosphere than in good old home. My disappointment was not deniable. I think it was like watching a movie with unbelievable perfect critics and everybody being flashed watching it and then when you watch it yourself you think: yeah, a good movie but that’s it, nothing super special.

Anyhow, we had fun and discussed the different culture we were celebrating in with some beer. We found great german wheat beer on the streets. AWESOME! Cheers!

The next day, Sunday, as well the last day of the celebrations, we were not sure wether we should attempt or not. It was the funeral of the sardine. In the morning we did our every 6 weeks washing in a 2,5km away laundry. As we still had the car it was an easy duty. Without the car we would have carried quite heavy wet washing through the city. This mentioned just as a side note.

As we didn’t have anything else to do and the burial was at the other side of the town at the beach Las Canteras, we thought why not give it another try to see how the funeral of the sardine would be. We heard it was another parade though this time all the sad widows would accompany the dying sardine.

At the beach we were lucky to get a seat at a table next to the promenade. We did not know where the sardine exactly would be buried or where the parade would find its way through the streets. However our place was perfect, it was just next to the street where the parade ended and the sardine was brought to its last destination. What a lucky coincidence! Later we talked to a lady who joined our table and she told us that usually there were much more people watching the funeral. Due to Corona a lot of people already decided to avoid huge mass gatherings. A very clever decision looking back and knowing what’s going on right now.

Anyhow, at this time we were happy to have joined the celebration and were very impressed by the big funeral march and the huge burning of the sardine in the water. Not knowing that the best was due to come, the spectacular firework which we definitely didn’t have expected. WOW!

On top of all was the priest letting me feel the connection to the carnival lord, see title picture.😁

On Monday we gave it a new try to visit the botanical garden which was closed because of Calima some days before. We spent a couple hours in the park (which didn’t even cost a penny) and were amazed about the beauty and the diversity of the flowers and plants.
“Jardin Canario” was opened in 1952 by the Swedish botanical Eric Ragner Svendsson. His idea was to gather all the island’s flower riches in one place, and at the same time do it in a way that made it look like it was their natural habitat. He did a good job! The garden is definitely worth visiting and surly great for picnics when you are discovering the island and need a rest.

Las Palmas was nice but we were ready to leave and were craving for some privacy at anchor again. Wednesday morning was our goal to leave to head further south of Gran Canaria to Pasito Blanco, a little anchorage.