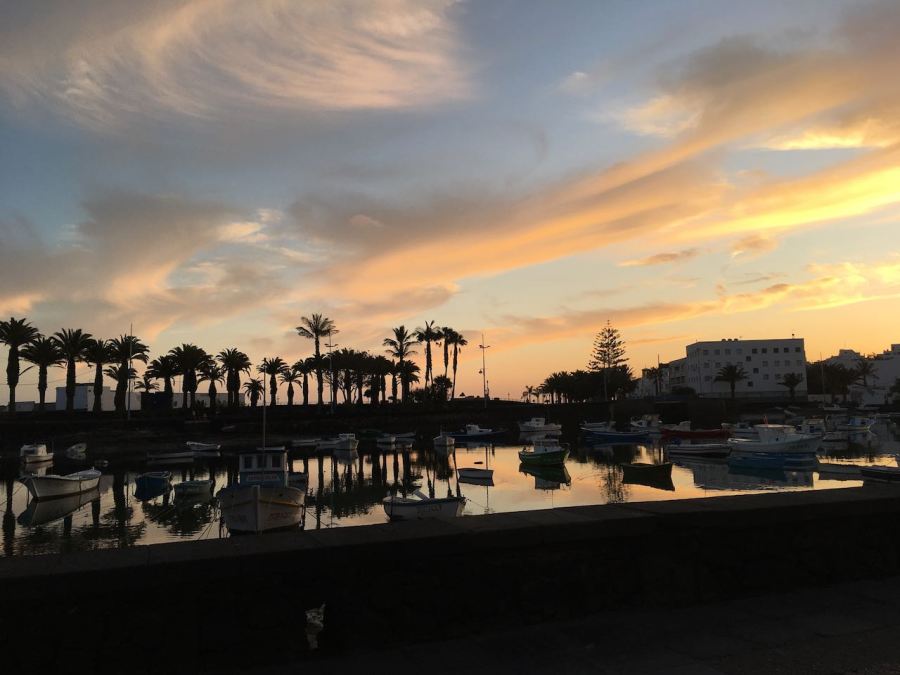 Long time no blog. All is well, just being lazy about writing lately. Today is the day! Leverage the momentum and start. no excuses!

We did have a beautiful, windy day sail tacking against the wind northbound up the east coast of Lanzarote from Rubicon to Arrecife. Our beloved staysail did a great job. We don’t use it often but when we need it, it’s such a nice help to comfortably stay close to the wind in a strong breeze. For the non-sailors: The staysail is a smaller front sail rigged at a second forestay which is closer to the mast, though smaller than the main genoa. You get better performance in strong winds than e.g. using a half reefed genoa.
Arriving at the marina of Arrecife was so much fun. Andrea and Gerhard from “Monte” and Paulyne and Rob from ” Saviour” were waiting for us at the platform. Helping with the lines and joining us for the always well deserved harbour beer. What a nice welcome! After checking in we prepared to have dinner with the crew of “Monte”. Saviour could not join us as they were still at anchor in the bay of Arrecife. They came the next day to the marina. Again it was a nice evening and we also met the crew of “Enterbrise B”, a German couple on an aluminium vessel.

It was a bit sad that again we couldn’t meet our Canadian friends from SV Carina in the marina. We had an appointment here in Arrecife but the marina, being very crowded, could not provide them a berth. As the weather forecast wasn’t very pleasant for being at anchor (where they were), they needed to find a safe place which they did in the marina of Puerto del Carmen (Some miles south of Arrecife). Sometimes it’s hard to come together. We were already trying to catch up in Porto Santo and Madeira but nothing worked out. We always missed us for a couple of days. At least we were on the same island now!
In the end we made it. Yeah! They took the bus and had an interesting journey to come and visit us for an early dinner. It was a nice afternoon/evening but due to bus schedules, sadly as it was, they were only able to stay for a couple of hours.

Those 10 days before heading to Germany for the holidays went by so fast! In between meeting our friends, having cheerful evenings and discovering more of the island we had lots of projects to do on Altimate. First of all our not very charming toilet issue. One can imagine it was not the most pleasant work to do but it turned out it was not as bad as expected. (We always kept in mind it were our own excrements we had to cope with…😉) The tubes were clogged with a lot of urine stone (which luckily and surprisingly didn’t smell much). In some parts there was only half of the diameter left, which meant it was definitely time to change. Logically we decided to replace all the tubes as well as the y-valve. A whole day pulling out and pushing in tubes in the narrow area under the sink and in the bilge, buying new flexible tubes and other necessary parts. We were proud to have solved our delicate problem. That was definitely worth a “toilet” beer.

So far we had not seen that much. Sure the chandlers and groceries and Arrecife itself but we wished to see more of the island. Thus one day (Monday 16th of December) we booked a car to explore Lanzarote. But first we needed to walk the 5 km to pick up the car close to the airport. Bye the time we finally got the car it was early afternoon and as we were not very prepared where to go we just headed south. In only 15 min we passed Puerto del Carmen and saw the sign of “Puerto Calero”. What else to do as driving to the next marina just to check if it is nice AND to see wether our friends from SV Carina were still in the harbour.
We found the boat immediately and knocked at their hull to see if they were in. And they were! OMG we had such a great afternoon/evening /night!😁 They were happy to see us, yipppeeee. Considering that we only wanted to say hello it turned out to be one of the funniest evenings. We started with an innocent tea with some cookies, kept on with a beautiful dinner including delicious cocktails and ended in a great dancing party with sharing music favourites. We had a blast! Well poor El Capitano had to suffer a little bit as he was the one who drove the car. Sometimes you loose sometime you win. 😁 This time I won.

Finally we discovered the island without any party breaks 😉. Our little car took us from one end of the island to other end. Driving through it, gave us an amazing impression of the unique landscape of Lanzarote. Two periods of massive volcanic eruptions in the 18th and 19th centuries shaped a quarter of its landmass and has probably built the unusual scenery. It mostly consists of rugged rock and sometimes it looked as if a giant just swung his shovel to start a growing field. It was amazing to see how much effort it needed to grow any plants in this volcanic pebble. At least the volcanic ash provides essential nutritions, absorbs the humidity at night and prevents the heat of the sun from evaporating the moisture during the day. It is even quite famous for its wines since the Duke of Clarence (who ever that is) started to grow some grapes. Each grape is protected from the wind by a so called “zoco”, a curve of volcanic bricks. We’ve seen those crescents of laval rock around small holes in the ground, all over the island. These act as dew traps and funnel moister to the plants protected within. That is indeed impressive!

We drove up to the northern tip to “Orzola” and down to the “Salinas de Jarubia” not far from “Yaiza” stopped at several “miradoros” and just enjoyed the nature. We did see a lot of sculptors created by Lanzarote’s most famous local, artist and architect, César Manrique. Who is mainly responsible for the carefully controlled sustainable economic blueprint in agriculture and tourist development of Lanzarote. It is e.g. remarkable that we haven’t seen any high-rise buildings.

After some days of driving, an evening with “Glühwein” (hot wine) on “Enterprise B” and sadly waving goodbye to our friends from “Monte” it was time to get ready to leave Altimate. Friday the 20th of December we jumped on the plane to celebrate the holidays with the family. We all met like last year at my brothers place in Leipzig. It was nice being together with the whole family. Of course we had a lot to catch up, we ate and drank and enjoyed being together. My bro, best chef ever, created delicious dishes which resulted, at least in my case, in somehow smaller clothes. 😉

As always time was flying. The 26th of December we drove to Essen to see more friends and celebrate the new year there. In between meeting friends we had some vaccinations and drove up north to also see El Capitanos parents. We managed to have all four of us (Jana, Luis and the two of us) together for a couple of hours before Luis left to drive back to Aachen. That was very nice as this is, due to our lifestyle, a very rare situation, just the 4 of us. This is definitely a downside not being able to see each other when you feel like it and especially not all together.
The day we headed to see my parents in law, it was as well El Capitanos birthday. We met for lunch in a boat restaurant with typical local German food. Haha what else… lunch on a boat.😉
Thus before we left, my parents and Jana prepared an early birthday breakfast for Norberto and he received nice birthday presents. But not enough, in the evening when we came back our dear friends had some champagne and a little cake waiting for the birthday kid. Lucky boy he was that day!

We stayed at our friends place, our ex neighbours Kissy and Alex, as it would have been too crowed at my parents place. They live in a huge house where we had our own big room including two bathrooms. We were so spoilt.😁 Thank you guys for being perfect hosts! 😘
It was time to get prepared for New Years Eve. The plan was to eat a lot. A five-course menu was planned with everybody helping to cook. We were four couples and it was so much fun! We cooked, ate, drank and celebrated the whole night long and just like this it was 5 am. I think it was since a long time the longest night we had…and as well the longest recovery time for the next days. OMG the party was great the hangover rather uncomfortable and long. We are soooo old 🤪.

By the time we felt like humans again, it was almost Norberto’s return flight day. But the evening before he left we decided to cook for our hosts to say thank you for their uncomplicated and comfortable accommodation. I stayed for 10 days longer but moved to my parents place to spent time with them. Just the three of us. That was nice, we were able to catch up in a quiet, comfortable and cosy environment. Especially after so many parties and visits it was nice to have some relaxing time. We did not do much but that we did intense. My mum cooked my favourite dishes and spoilt me with just looking after me. It should have been the other way round, I guess, but just being daughter was veeeery nice. At least I could help them with getting a new washing machine, so I was not completely useless 😉.
I got all the parts we ordered for Altimate or for us to take back and filled up every little spare inch in my suitcase with “Mettwürstchen” and sweets we couldn’t get on the island. On my last day Luis came back to Essen to spent the day with us and to take me to the airport the next day. Good boy.
Yes, it is always sad to say goodbye but on the other hand I was looking forward to being back on Altimate and reunited with El Capitano.