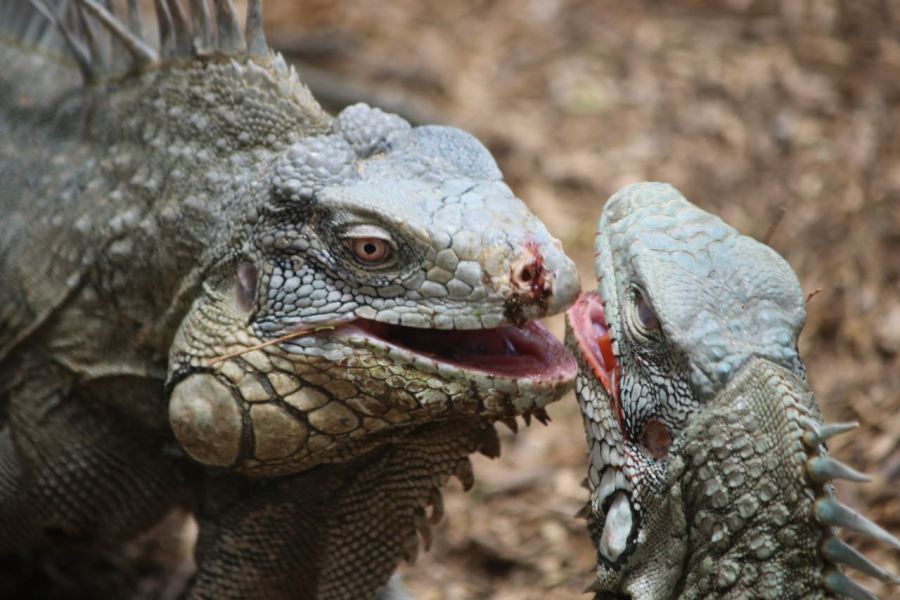 I thought these two iguanas from the featured image looked a little like big scary dinosaurs. Blood were already running down their noses and it seemed as if they were prepared for fighting to death. Trying to survive in their harsh environment. And we, brave as we were, putting us in high danger following the fighting creatures to catch this one perfect image. They do look scary, don’t they? I might have watched too many movies lately…somehow my inner movie started to exaggerate a little. The truth is, that while we had a picnic at the national park in Bonaire those iguanas came and literally made us feed them. They were almost tame being used to people having lunch close to their homes. It looked as if they were actually waiting – so in fact there was no bravery needed from our side to get this shot.

Maybe I should have started from where we left. The trip from Saint Martin to Bonaire was fortunately unspectacular. We left Marigot bay Saturday afternoon and arrived early Thursday morning (26th of May) at 4am at the marina entrance dock at Bonaire. A few days before we left St. Martin we had met a nice British couple, Fiona and Iain on Ruffian. They left to sail to Bonaire a few days before we left. That was lucky for us as we could take advantage of their information regarding free buoys in Bonaire. It was kind of a hassle to get a buoy (especially in hurricane times) as nobody is organising the assignment of the buoys. One need to ask who is leaving and if you’ve found somebody you needed to be lucky that you were the first to get the buoy. Anyhow, we were super lucky as Ruffian had organised for us a buoy from Friday. That meant, worst case we would have stayed one night at the marina. But as we were up so early and listening to a cruisers net we got the information that two boats had left so we got a buoy right away. Though this one was only free for a couple of days, it was perfect for us as we knew we had another buoy already waiting for us the next day.

Our first impression of Bonaire felt like being somewhere in a Dutch city. The village Kralendijk was very touristic and so typical Dutch. Pretty and nicely decorated boutiques followed by inviting bars and fancy restaurants underlined the Dutch feeling. We found “kibbeling” and “frikandel” on some menus (Dutch fast food dishes), a lot of tall blond people and quite a lot of bicycles. A certain sign of being somewhere in the Netherlands😉.
At second glance Bonaire is a small very dry island covered in cacti with many, many flamingos, lizards, parrots and donkeys. It is surrounded by indescribably beautiful water and a fascinating under water world. We were still very new to diving but could immediately understand why it was called “Divers Paradise”. Moored to a buoy you could just jump in the water from your boat and go diving. Only a few kicks with the fins and one had reached the reef which surrounds the island. Just perfect, also for snorkelling. One afternoon when we were in a mood for a short snorkel, we jumped in the water and swam just a few meters away from Altimate when we saw an octopus. It was a mazing, those creatures are just fascinating!! Unfortunately we didn’t take our gopro camera for pics, what a bummer!

Now imagine being in THE best spot for snorkelling and diving and having ear issues. Another bummer! No joke, El Capitano suffered from ear pressure and not being able to decompress his ears. He had this problem for quite a while but in Bonaire it got worse and in the end he had trouble hearing too. Finally he found himself going to a doctor and came back with cleaned ears, the ability to hear again and the wisdom of having an ear infection. So the first ten days we didn’t do much connected to any kind of water activities. The good thing was that I now had time to work on my postponed sewing project. Making covers for all of our salon cushions. By the time El Capitano was allowed back into the water I managed to finish 4 cushions (still 8 to go).

The sailor community in Bonaire was really great. There was so much going on. Many weekly events like, bbq, playing music, noodling and more. We invited sailors and got invited. We went to a presentation about mantas (very interesting) and even went to an open air cinema with some sailors to watch the new “Top Gun”. It was a huge different to the French islands, where I had the impression a sailor community doesn’t really exist. With Fiona and Iain from Ruffian we rented a car for two days to discover the island. On our first day we explored the south part of Bonaire including Rincon, which used to be the capital of Bonaire. The second day we enjoyed the National Parc which covers the entire northern head of the island. We had two hot bumpy fun days. Only the streets in the villages and the main roads were paved. Most of the time we had to use dirt roads with big holes. That was fun but as I said also veeery shaky. We saw many flamingoes, endless cacti, salt lakes, slave houses, rough environment, Indian paintings, fantastic blowholes and more. Eye catching to me were the many fences made from cactus. The candle cactus named Yatu were used one plant next to the other to built those fences. In between a wire to keep the plants in place. I’m sure those fences did their duty.

After our “rodeo” tour, El Capitano was finally allowed to go back into the deep blue. Yeah! So snorkelling was a daily must and so much fun. So many relaxed fishes, schools of fish, corals, eels – it felt like being in a huge aquarium. And then we were again super lucky! Ruffian were so unbelievably kind to offer us their diving gear. That was awesome! We could jump off their boat and see how we managed our first dive alone. And that without the hassle of renting gear and going out with a dive guide. It was just perfect. We were both pretty excited but once we were down (we didn’t go deeper than 12 metres) and got again used to the breathing and everything, we felt comfortable and relaxed. The reef was only a few fin kicks away – what a great way to dive! The most beautiful green moraine said hello and we most respectfully greeted back. Due to safety reason, because it was our first dive, we didn’t take the gopro. We thought we’d be busy with ourselves. So again no proof 😥. After about 40 min we fortunately found our way back to the boat. It was just great. Boy, we were so proud! As we felt pretty confident, we asked Ruffian wether they would go diving with us at another spot. The plan was to take a big boat (not the dinghies) to a nice diving spot with a buoy, have a dive and a lunch together on the boat. Said and done. On Sunday Ruffian took us and the crew from “Blue Mist” Louise and Ross to a dive spot called “Kalli’s” in the north west of Bonaire. The wind was very strong that day so we were a little concerned about going into the water. Diving gear is kind of heavy and for unexperienced divers like us it looked challenging to jump into the water. Again we were very lucky as Ross was an experienced dive master and told us not to worry. Once in the water everything would be fine. Also we felt of course safe to have an experienced diver with us as Ruffian were also just beginners like us. The dive was wonderful and after everybody being back aboard we had some brunch. I had backed a bread and a “Hefezopf” and we brought cheese, ham and homemade marmalade. Ruffian had made a nice potato-salad and for tea-time Blue Mist had made yummy scones with jam and cream. Can a day get any better?

Time is flying again, only 6,5 weeks until the wedding. Today is Tuesday the 14th of June and we’re getting ready to leave tomorrow morning to Santa Marta Colombia. The weather looks quite good so we feel comfortable to pass the “Cabo de Vela” in the south of Colombia. That is a difficult spot to pass due to accelerated winds and higher than normal waves. We expect to arrive Saturday morning in Colombia. Bye, bye until then.