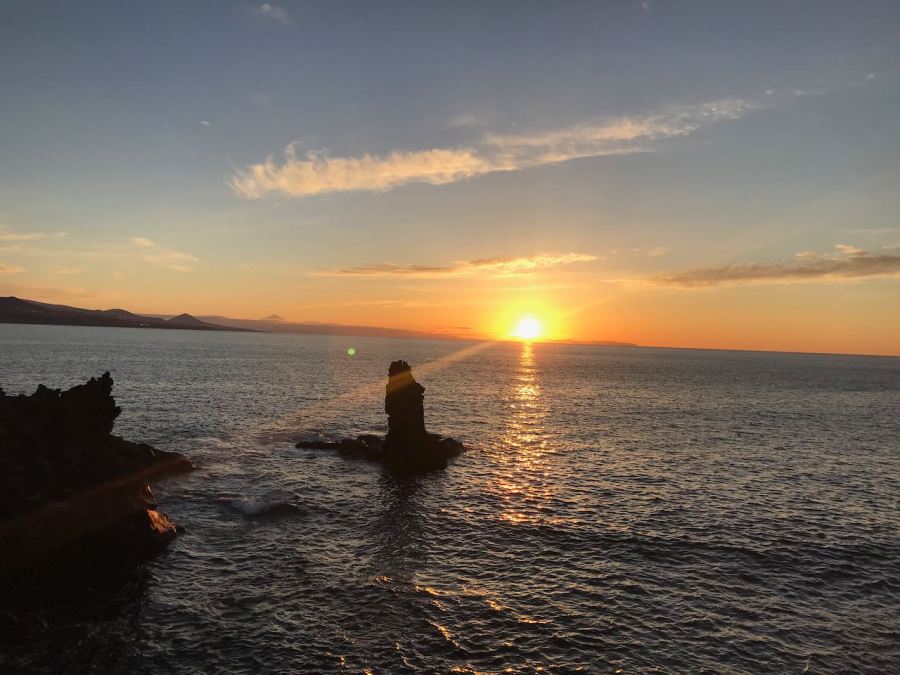 Unbelievable, but we eventually managed to escape from our dear lockdown home Las Palmas de Gran Canaria. Finally saying goodbye to all the nice people we met and having a last coffee at the Sailors bar, a last washing on the catamaran 😁, a last shower in the “Baños”, a last walk to the market, a last chat with our neighbour…, we realised we were very lucky that we got stuck in Las Palmas (LP). It was definitely not the worst place to be!

Our last two weeks in Las Palmas were very busy. Procrastinating was not possible anymore! Being so used to the fact that one didn’t know when we would be able to leave, at lot of things were always put off to a later time to be done. Why work today when you can also do it tomorrow😉? Well, time had changed, now we were allowed to leave and we wanted to leave so things needed to be done. Dentist, Hairdresser, cleaning, washing, provisioning, getting a few more materials we still needed for some further projects and and and. No big deals but it had to be done and took quite some time.

Fortunately we tricked ourselves in asking Rainer from Seven Seas to fix a dentist appointment a couple of weeks ago when we run into him just before he went to his dentist. No chance for us to sneak out. The first time in our 27 or is it already 28 years of marriage? that we, El Capitano and me went together to a dentist 🤣. Luckily there was not much to talk about, all good with our teeth, a quick cleaning, a small charge and the sailor couple happily left the doctor’s practice.

Eamon, the Irish sailor (he rented a car) was so nice to take us to Decathlon to finally buy some walking boots. Our attempt to buy some failed- it was the first day of Decathlons reopening- because we were not allowed to try on the boots. What crazy rules! Disinfection? Ok. Gloves? Ok. No doubt about wearing masks, but why one is not allowed to try on shoes? Who knows, maybe we need to be politicians to understand🤷‍♀️.No idea how people are suppose to find boots which fit without trying them on. Anyhow, this time -maybe two weeks later- it was all allowed again and we tried a lot of boots and eventually bought some. Mission accomplished.

In between our busy days we wanted to try our new boots and headed to the north end of Las Canteras beach with the bicycles. From there we wanted to start the trail to Las Coloradas, the north westerly tip of LP. It was a beautiful late afternoon on our last Saturday in Las Palmas when we started our walk. We changed our flip flops at a bench and jumped into our brand new walking boots. With hot but very protected feet we found another beach “Playa del Confital” where a lot of young locals enjoyed their weekend.

Further on the area got a bit rougher so we could challenge our new boots for the first time. Well, ok that was not that challenging but we all could get used to each other, the boots to our feet and vice versa. It was a very pleasant evening walk with surprisingly spectacular views- we could perfectly see Tenerife and its mountain “Pico del Teide”- and just the right amount of km for a “first new boots” walk. Back at the beach we changed back to flip flops and decided to have dinner in a small Italian restaurant. One left table was waiting for us and we happily took it and enjoyed not only a nice pizza but also a great view. Though the best part was, that it was the perfect timing to see a spectacular sunset next to Tenerife.

Our new spray hood including tailor made googles to cover the sensitive new “eyes” were finished and installed as well as our extended solar panels. Sunny from Sunnysails did a very good job. We can highly recommend his work.

While I was cutting out some zippers from the old spray hood our Spanish neighbour Ibrahim was getting ready his catamaran for some schooling courses in survival training at sea. To transport diving bottles and other gear he used a funny transportation. An old first generation jet ski. Curious as I am, I asked what it was and when I was getting excited about it after his explanation, he asked me if I wanted to have a go.

Of course I wanted! It was soooo much fun. This vehicle looked like a square bath tub with a joy stick controlling the motor. Would you expect any fast ride? Well, I didn’t. But outside the marina when he accelerated the beast, it really went beyond expectations. I could not stop laughing, this thing was a blast! Super fast, perfect in curves AND you didn’t even get wet. I felt like being in an old Bond movie with super fancy “new” toys. That was such a great distraction from our “getting boat ready” work.
Ibrahim was also the one who, a couple of days later, checked our rig. He is an experienced sailor and has no problems in getting up the mast.

The days went by with us working and in the evenings we often said goodbye to our new friends. There was our last German speaking Monday, where we said bye bye. Petra and Rainer from Seven Seas invited us for supper for a last time, we said “au revoir” to the english couple from platform S Emily and Dan at a pizza house close by, we went out for a nice last dinner in Vagueta (nice quarter of Las Palmas) with Eamon and said good bye to lots of other people we met. Veronica, Mary, Lothar and all the others who all have made our stay in Las Palmas such a great experience.

Thursday late afternoon we finally got Altimate and us ready to leave. We were tired and decided to cycle up to Plaza Catalina for the last time to have an easy dinner in one of the restaurants. When we got back to the platform we had a little chat with the French guys from the, only a few days ago newly arrived cat Diapason, Diana and Pascal. (They stayed the whole time at anchor at La Graciosa, also a nice place to be locked.) These two are our new poster French couple. They speak very well English and also like to talk and luckily like all French they also love to eat 😉. For me it felt as they were eating all the time when I was passing by. Ok, it was probably only an impression but it was funny anyhow. While getting my last washings done on the Danish cat (thank you again so much guys, it makes life so much easier to have a washing machine close by), they were always eating -I swear! And it also always looked so yammi, always with a glass of wine … and me hungry😁 I always said “bon appétit”. But back to the original story. We passed and they asked weather we are hungry, because she just made a soup and offered it to us. How nice is that? Unfortunately we had already eaten, but Diane said: “just bring me a box and you can take the soup with you for the next day.” Said and done. And after sailing for 8 hours the next day we were very happy to have dinner ready in the evening. Even if you don’t like sailing it is worth living this lifestyle because you meet so many nice people!

We left LP Friday at 8:15 am after filling up our diesel tank and arrived in Anfi del Mar in the south of Gran Canaria at 4:30 pm. We were flying down the coast in the acceleration zone, having 28 to 31 knots of wind with only a piece of genoa hoisted. Fabulous! Only a couple of miles before our anchorage the acceleration zone was finished and the wind dropped within 5 minutes down to 5 knots- crazy!

The weekend here was pretty busy with locals enjoying their free time. Some with small party boats and a lot of music others speeding their jet skis and a lot of youngsters having fun on pedal boats with far too many kids on it😉. Veronica and Renato who spend the weekend in Puerto Rico, which is close by, came to visit us and we had a stroll and a coffee in the only open bar at the usually very crowded resort/hotel area.
Now we are just enjoying our freedom at the anchorage, swimming, reading, watching people, writing blog or like El Capitano, do running ashore. It is much calmer today and we’re almost the only boat with humans living on it in the anchorage. It just feels sooo good!