Sunday morning we finally left Bourgenay pretty early in the morning after finishing all the things aboard we had to do. We decided to sail for a couple of weeks as long as the weather is still comfortable and before heading to La Rochelle. Our destination was Ile d’Yeu, Port – Joinville which we visited already this summer ( with the British couple who’s motor was broken down). It was a nice sailing start – beautiful weather with a nice brise of wind. This time – no soccer 🙂 – we had more time and enjoyed the following day with a sweet bicycle ride around the island- well – at least half the island. We rode to the little lighthouse at the east top of the island and then had a stop for lunch at Port de la Meule, which is a tiny picturesque fishing harbour at the south of the island. So sweet!

After a nice talk with a friendly couple and our bellies filled up we made it slowly back to Altimate.
Our neighbours – also owners of an Ovni – were busy preparing there dinner. Two huge crabs which they had cooked before and were now pulling out all the meat. With my still rather poor French I was trying to understand how they prepare those crabs and what would they eat it with. Well, two hours later they offered us some bites of there food – it was delicious. Yammi Thank You!

Two Ovni’s side by side 🙂

The weather forecast offered us pretty strong winds for the next day but at least in the right direction where we wanted to go. We made up our minds and decided that we would leave the next day as we were kind of fed up with being in a marina packed side by side with other boats, unless of course the winds would be really too much. Being conscious about the winds we prepared our cutterstay which is a second jib for heavy weather. So perfectly prepared for strong winds we left Port-Jointville a little nervous the next morning. And then? Nothing! No wind , we even had to motor for a couple of hours to reach our next destination Ile Noirmoutier. Still we prefer to be prepared than be surprised 🙂

We arrived in the late afternoon at the anchorage “ Bois de la Chaise”, which is on the northeast corner of the island, and enjoyed being alone at anchor, had a nice easy meal and were happy just being here. 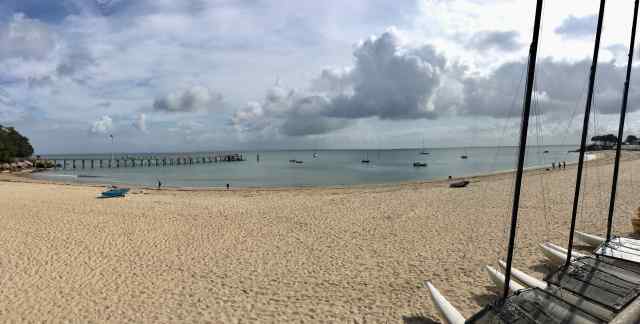 The next few days we explored a little the well worth visiting island, did nothing, waited to let the low pressure system pass by, walked 30 minutes one direction to get some groceries ( plus 15 minutes to get ashore with the dinghy) at a beautiful farmers market and cleaned up and try to repair our leaking holding tank ( help, horrible, disgusting) jacky. TO ALL OF YOU please cross fingers that it will hold.

Today ( Saturday) we thought we would have a quiet nice sunny day where we could take out our dinghi to explore another side of the island and do some walking exercise. We were so wrong! It turned into a rather cloudy rainy day with very strong winds up to 30 knots. Taking the dinghi ashore against strong winds and waves and trying not to get wet is fairly hard work (and probably impossible)  and besides we didn’t want to leave Altimate alone in those winds beeing at anchor. So we ended up staying in our cosy little home drinking hot tea, watching the tough brave locals rowing there boats despite the weather, reading , baking a banana bread, checking on Altimate and just enjoying the easy life. It is kind of interesting how fast a day passes by with almost doing nothing – great. Another side effect of the strong winds is that our wind generator is doing an awesome job, he’s actually overturning himself. He managed to fully reload our batteries which were very down yesterday evening. Anoyher good job done 🙂

Monday we plan to leave Noirmoutier to head back south. The forecast promises northerly winds which would take us nicely to first Ile d’Yeu and later to Les Sables d’olonnes. We’ll see …