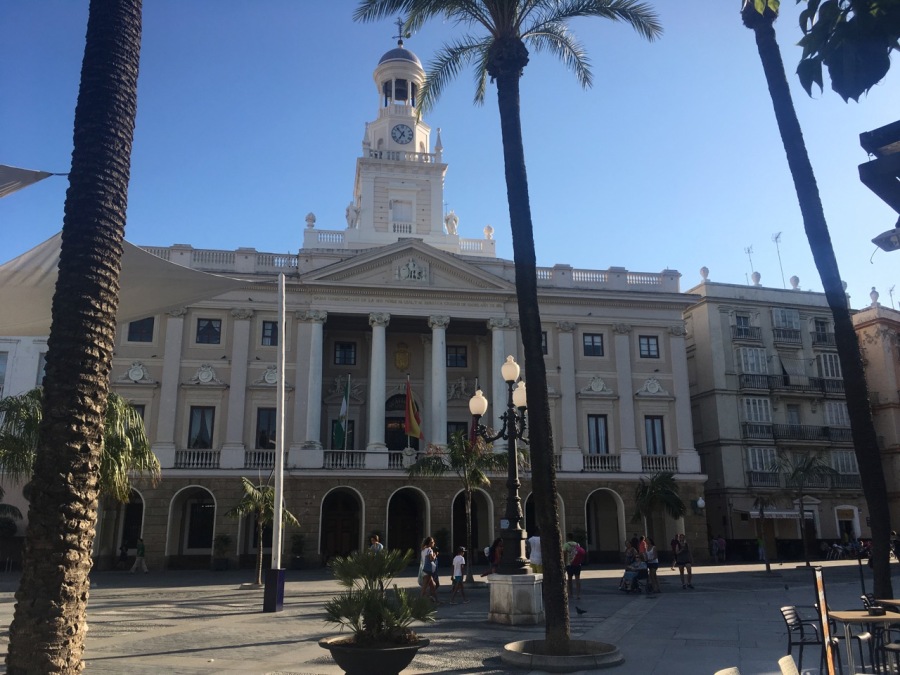 Cádiz likes to call itself the oldest city in Europe. According to legend, Hercules was the founder, but history proved the founding of the city Gadir by the Phoenicians in around 1100 B.C. However it was definitely the oldest town we’ve been so far.

Leaving Sevilla turned out to be pretty easy. All went well, the bridge opened in time as well as the lock. This time we shared the basin with a big container ship which made us feel very small and a little squeezed in. 🤪 It was an absolute perfect timing! 8am bridge, 9am lock, high tide was at 8am so we could jump on the current down the river which felt like flying 💪. (Check out the video in the media blog) 8 knots in average – ok almost- but instead of a stop half way the river we did it in one nice leg. Sleepover at the estuary close to Bonanza and off we went the next morning at a reasonable time around 10am 😁with the tide lifting us out of the river back into the Atlantic.

Cádiz welcomed us a bit sleepy. It was late afternoon on Sunday the 1st of Sept. when we arrived. No answer on VHF (ok, we should know it by now😉). The reception platform occupied, we decided to fix the boat at the gas station to find out where to stay. After a while searching, we found a nice guy who helped us. It was off season, so not many people around, office times reduced. Anyway he checked us in and we got a nice place in the marina Americá.

As always we liked to explore Cádiz by drifting through the city. The old town is amazing with its narrow streets and millions of little specialized shops. I might repead myself but I just love it. All those small stores, starting with my favorite the haberdashery, the cute diy shops, bakerys, little mom-and-pop groceries, fruit and vegetable stores, butcher, flower shops, fishing shops and much more- all, (it seems) privatly owned – and inbetween thousands of bars, cafés and restaurants. So cute and lifely. We often just sit in a café watch the people and dive into the charm of the city we are currently visiting.
The absolute highlight was that we stumbled over a “Pommesbude” (how we call in the German region where we grew up a small snack bar) where you could get “Fikandel special” (special dutch sausage with curry ketchup, majonaise, onions) or our most favorite “Currywurst” (German sausage with a curry sauce). Not the healthiest food on earth but something you need at least once or twice a year, as it makes you feel being at home again.

Apart from enjoying the beautiful city with its architectural amazing buildings and the picturesque cathedrale we didn’t do much exciting. With a young German couple and their sweet baby from “Midnight sun”, we spent a nice and very talkative evening. Well, it was more the night as it was 3am in the morning by the time we came back.😉 Very behaved baby, but we were happy that we knew we didn’t have to get up early the next morning. Young parents happyness😉
On our way to catch some fishes we unfortunately lost quite a lot of lures. So it was time to get some new ones. In the maze of the old town we found a perfect store. A cute fishermen store. The guys in there were so helpful and it was fun to communicate with hands and feet and whatever was needed to make ourselfes understood. We bought two different lures and the owner showed us many fotos of fishes he has caught with the lures. It was so much fun and in the end we felt as if we were experts in lures😂. The son gave us his email. He asked us to send him a picture of the first fish we’ll catch with his bait. I do hope we can fulfill his wish soon.😉

With only a few errands to run and lazy strolls to town the week passed by fast. Our next destination was Tangier, Morocco, which meant passing the Strait of Gibralta. Oohoo What a pass! At least it already sounds a bit far away 😉. Ok, it only meant we checked the weather and wind conditions every day as there was a lot of wind the whole week, so we decided to leave on Sunday when the wind and waves had calmed again.
7am in the morning we left Cádiz at the same time with our new german friends who were heading to the med.