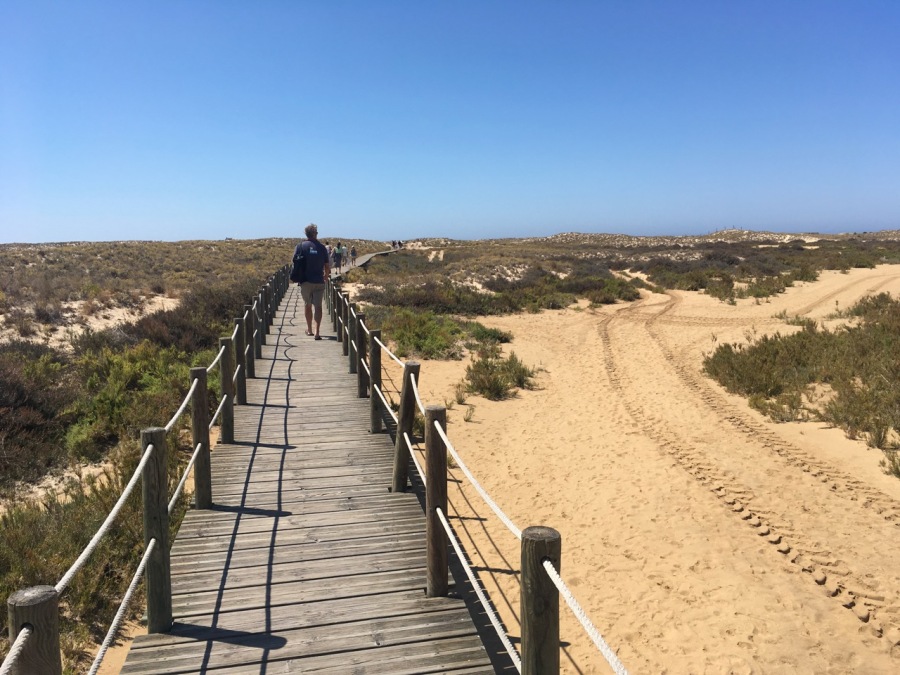 Finally I’m in the mood to write again. It took me quite a while to leave the holiday feeling after the kids left. Yes I know that y’all think we’re always on holidays, but we’re not! 😎 We as well do have our every day life like everyone else, maybe just in a little different way.

One can imagine that we had a great time with our visitors. Mom and Dad were more than happy having their little girl and Benoit aboard.
After a couple of days in Lisbon with the two of them, we headed back to Cascais (anchoring) in the evening of the 19th of July to have an easy and early start to sail down to the Algarve. It took us around 24 hours to sail down the Portugues coast and around the Cabo de São Vicente. It was quite a rough ride by the time we were rounding the cap but all in all a great and fast leg.

Around the cap we were expecting less wind but unfortunately the wind increased and we had gusts up to 37 knots 😳, at 3am and nice moon light. Maybe a bit too much for a first trip? At least we arrived at the entrance of the lagoon Alvor in perfect sunrise and tide conditions. AND we managed to present the kids a beautiful surrounding with lovely beaches, no swell or wind in the morning, Best conditions to catch up missing sleep with sweet dreams.

The four of us decided to head a little bit further the Algarve to sail to the bay of Portimao so that the kids could enjoy the beaches and at the same time have a reasonable distance for Benoit to reach the Faro airport with public transport. He only stayed 8 days with us. We spoiled them with nice food, sometimes in restaurants and sometimes aboard. Jana’s big wish was having a BBQ which we were able to happily fulfill. We played games, presented  beautifully made caipirinhas and tried to make their stay as perfect as possible. Parents’ love 😍

You see, sometimes views and expactations differ a little and sometimes a lot…🤓 We asked our visitors to write a guest article for us to explain their impressions and experience on Altimate. Here you can read what our dear sweet daughter felt. 🤣

Reading this blog, you have probably developed some dreamy, adventurous version of what it’s like sailing the world; soaking in the calm of the big wide ocean, a refreshing breeze lightly blowing through your sun kissed hair and dolphins accompanying you on your many adventures as your new best friends all while enjoying a relaxing life on board. But trust me… it’s all a lie.

You want to take a nice shower after a long day enjoying the sun? That’s cute! Real sailors only shower once per week (twice if you’re lucky) and with shower, I mean a hose…, with freezing cold water…, outside…, on the back of the boat. But “you can do a quick jump in the (f*** cold) Atlantic Ocean before and it will feel perfectly warm afterwards” (yeah, thanks for the tip mom…).

Or how about putting your dirty dishes in the dishwasher after a delicious meal during sunset? You wish, pump up some good old sea water and try not to faint because the water smells like foul eggs at the beginning since it’s been sitting in the tubes for a few hours and mother nature (more specifically some weird bacteria) is doing its thing.

You know how every normal person feels rather uncomfortable about other people knowing what they do on the toilet? Well, get over yourself; if you are staying on Altimate there are no fake news about anybody’s toilet business. On the boat, you have to make sure your number 1 goes out in the sea and number 2 in the black water tank. Consequentially, before doing your thing the rules are to check the setting for it to go into the right tube and since it can be a little annoying to check every time before it’s prime time, you’ll have to get used to people on board asking in the morning if anybody else has to go for a Winnie the Pooh (Number 2) since the tank will be closed and otherwise only Pipi Langstrumps (Number 1) are allowed anymore. And don’t freak out if on your way to the toilet somebody jumps up, points a finger at you and demands to know if you are meeting Winnie the Pooh or Pipi Langstrumpf, they probably just forgot to put the settings back to normal and wanted to make sure your business finds its way of purpose.

But, enough about characters from children’s movies with unfortunate names… Once you get over yourself and stop being a whiny, spoiled human, control those goosebumps and jump in that cold water like a man (or woman in my case), get used to the egg smell and accept the fact that frequent showers and the use of shampoo actually isn’t that good for your body, spending two weeks on Altimate will be your best holidays ever.

I took about 7204715 pictures of sunsets because every night it was magical. I saw dolphins, and it made me jump, screaming “Dolphins!” and excitingly pointing at them like a child that has to make sure everybody can see the obvious. We spent a day at the most beautiful beach in the lagoons of Faro which almost made me believe to be in the Caribbean, the ice-cold sea gave it away though. I extended the ‘read’ list on my Kindle by about 10 books and played 500 rounds of Rumikub, of which I won 498 (just casually throwing that in here..). Benito was able to expand his extensive repertoire of sailors’ knots and I finally got my first BBQ of the year!

And of course, I got to spent 2 awesome weeks with my lovely parents! ☺

Jokes, I only came for the free food and to get tanned…

Yeah, yeah the ugly truth, it’s also a bit annoying seeing the best spots on the boat being occupied by our visitors while they keep us busy preparing the next sundowner along with candlelight dinner.😀

Enough jokes… we love having visitors and espeacially our kids aboard and are looking forward to welcome our son in Madeira at the end of September.

Benoit left at the 25th of July. A couple of days later we moved 40 miles further on to reach the lagoon of Faro and the Caribbean like beaches of Ilha Culatra. Jana (hopefully😉) enjoyed the lazy relaxing days sunbathing, reading, playing, talking and just being looked after as well as we did. The only thing we didn’t manage to do the whole time, but was high up on our girly to do list, was SHOPPING. Somehow we could not find any appropriate shops 🤷‍♀️, damn! Definitely a goal for next time.

Time always flies when you’re enjoying yourself. It felt much too short when we had to say goodbye to Jana. We took her as close to Faro as we could, up in the river of Faro where we had two days left with her. The flight was on the 2nd of August in the afternoon. We made sure that we were early enough in the little harbor of Faro. Early meant in time with the tide as around high tide you can’t enter the harbor. You need to pass under a little train bridge to enter. The first time we left the harbor we all had to laydown in our dinghy to pass through, there was only ONE inch left between the bridge and our noses. Knowing this we wanted to be sure to be able to pass in an upright position.

Saying goodbye is always sad but on the other hand we can again look forward to our next visitor.

One thought on “Two sides of a coin😇”